Silence — or Stillness — as a Spiritual Discipline

A good friend who is spiritually experienced and wise but not a Friend recently asked me about the Quaker practice of silent worship. Here’s what I wrote back: 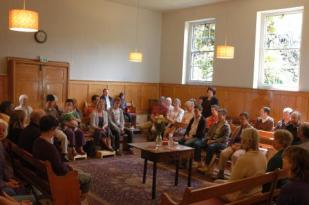 For many Friends, myself included, stillness is a better term for what we are talking about than silence.  Psalm 46, in a passage Quakers like, says “Be still and know that I am God.”  We Friends don’t seek to be silent; rather, we seek to wait upon God, to hear what God is saying to us and sometimes through us. Hence, in the stillness, we are occasionally surprised to find ourselves compelled to speak. (And hence, early Friends, at times quaking before they rose to speak, were derided as Quakers.  Friends accepted this term.)

Stillness is a spiritual discipline (like Mass, like walking the labyrinth, like fasting, like praying, like hymn singing, etc.). Friends don’t see it as a tradition, but rather as an essential practice for their worship together. While other Christians, even early followers of Jesus, knew the use of stillness in worship, it was mostly practiced among monastic orders in recent centuries. George Fox, the founder of Quakerism (if there is one) was a literate if unschooled young man in the mid-17th century who found himself full of questions. He took those questions to various authorities of his day and found their answers not helpful. One day, on a spiritual retreat at a place called Pendle Hill, he heard a voice saying “There is one, even Jesus Christ, that can speak to thy condition.” In that epiphany, Fox realized that Jesus could and would speak directly to each of us if we will just still ourselves and listen. Revelation, he realized, is a continuing thing, not something finished and boxed in a book two millennia ago.

Continuing revelation is thus a core belief of (most) Friends. From this also comes Friends’ sturdy conviction about equality (men and women, black and white): all may hear what God is saying to us, and in that divine capacity we are equal one to another.

From their beginnings, Friends have been especially fond of the Gospel of John. Among the reasons are those majestic, puzzling opening words: “In the beginning was the Word, and the Word was with God, and the Word was God.”  Before the Bible, before Jesus lived, before time, before everything, was the Word. And we can hear that Word if we will still ourselves and listen.

Lastly, a personal note. In my teens I wanted going to church to be a deeper, more meaningful experience, but the more I tried to say the words that I was asked to say (creeds, prayers, hymns, responsive readings) the more distance I felt. Those were not my words; I could not give them my full assent. While gathering in stillness didn’t come easily to me as a spiritual practice, I found it more satisfying than going to a conventional worship service. Occasionally going to a Quaker meeting I would hear an unplanned message that was truly amazing: fresh, clear, energized, piercing. Those moments were not made less potent for me by the more numerous ordinary messages I also heard in Meetings. Gradually I realized that the way of gathering in silence was the spiritual discipline for me.

Doug Bennett is Emeritus President and Professor of Politics at Earlham College. He has a wife, Ellen, and two sons, Tommy (born 1984) and Robbie (born 2003).
View all posts by Doug Bennett →
This entry was posted in Quaker Practices and tagged Continuing revelation, John, Psalm 46, Silence, Stillness. Bookmark the permalink.

2 Responses to Silence — or Stillness — as a Spiritual Discipline